So it’s finally happened… After planning on giving cyclocross a go, I’ve finally managed to get myself a bike that I think is going to be perfectly suitable. Although cross season is pretty much done for, in-between and after finishing studying this year at university, I’m going to try and prepare myself for some cross races and perhaps some off-road sportives or adventure-style type of riding. We’ll have to see how things go as I’ve got some road riding plans too but that’s the plan thus far.

The bike is a Norco Threshold C Rival, Norco being a reputable Canadian brand that are exclusively stocked by Evans Cycles in the UK. They tend to be great value for money and the bike was actually a lot cheaper for me than a lot of lower-spec aluminium offerings, specifically from BMC and Specialized. For cross, I was looking more at aluminium-framed bikes as they can be chucked about a little more but do bear a weight penalty so this was quite a nice surprise to see. The frame is made of what Norco call, ‘mid-modulus’ carbon and their top-end frames are made of ‘high-modulus’ or in some cases, ‘ultra-high modulus’. This means that the frame is a little heavier than other carbon offerings by this brand but I think Norco have done a lot of interesting things with this frame to fully utilise it for cyclocross. The seatstays are what’s called ‘ARC-Race’ which from the image, you can see arc a little to provide a bit more comfort and the frame is what is built around a particularly beefy PF30 bottom bracket – I’m not a fan of press-fit bottom brackets but so far this has been problem-free. The frame also has an ‘Armor-Lite’ coating which supposedly protects from stone chips and the like so as not to ruin that lovely frame and the internal cabling implores a technology called ‘Gizmo’ which stops the cables rattling inside the frame and stops dirt attracting into the cabling. I absolutely love the paint-job of this bike – Norco have decided to employ a chequered black and red and I think it really stands out from the crowd. Weirdly though, the bike has a whole host of eyelets to fit mudguards / racks etc… but seeing as this is designed as a race-ready cyclocross bike (the Search is their adventure model), it is a little strange but doesn’t detract from the ride. 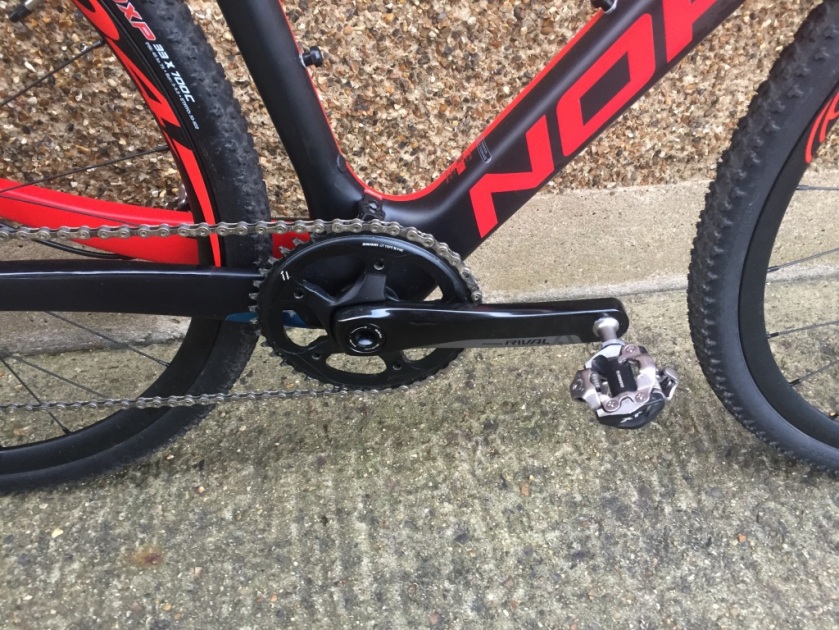 The groupset is a full SRAM Rival 1x groupset, something which I really wanted to have on this bike due to the added security of the clutch-mechanism in the rear derailleur and the narrow-wide chainrings to perfectly match the X-Sync PC1130 chain. For cross, I don’t think Shimano are even remotely near the level that SRAM have come to, they’re onto a winner with their CX1 systems. The levers are a little bulbous as they contain the reservoir for the hydraulics but I actually quite like the look of them and they feel very snug and secure when handling the bike. In terms of gear ratios, the bike came with a 42t chainring which is a little on the big side but at least it means that you get a harder gear with 42-11. Cassette-wise, an 11-32 is specced but I instantly changed this to an 11-36 so the bike is more suitable for road-riding. Off-road a 32 would have been fine but it would have been hard work getting up the short, steep climbs of the Chilterns on the road.

The wheels are Alexrims A-Class CXD4’s which are pretty unremarkable but roll nicely and they don’t weigh too much. It’s a shame they’re not tubeless-ready but I might have a go at converting them to ‘ghetto-tubeless’ at some point by using electrical insulation tape and sealant which seems to work. Clement MXP tyres are specced which I’ve been impressed with off-road so far but I have punctured already and this is why I think tubeless is ultimately the way I’ll go on this bike as not only will it reduce the risk of punctures but also I can run lower pressures off-road. You can’t really do this with inner tubes as if you go too low, you could pinch-flat. A feature that I was very keen on having was thru-axles as opposed to quick-release skewers for added stiffness and better disc rotor alignment and Norco have specced DT Swiss Thru-Axle’s front and rear. You really can tell the added stiffness they bring and after riding my road bike after this, it’s very noticeable to perceive this added benefit.

The stem and handlebar are own-brand Norco which again are unremarkable but have a good anatomical shape. The bar tape is nothing special but easy to replace in the future. I also instantly changed the seatpost and saddle, the saddle to a Fabric Scoop as I get on with this and it’s very easy to clean which is always a bonus. The seatpost is a Specialized S-Works COBL GOBL-R which has a Zertz-insert at the head of the post which gives it a cobra-like shape but I’ve been mightily impressed with it so far. The bike came with a Norco carbon seatpost which I will put on another bike.

So that’s the bike and over my Christmas holidays, I’ve managed to get a few rides in around the local trails and even went on a club CX ride. Unfortunately I won’t get a chance to do any more until Easter as I’m at university but once I have put the bike through its paces, I will fully review this bike but so far on a handful of rides, I’ve been very impressed. It handles very nicely, the Rival 1x groupset is excellent and it has ample clearance for mud which it has certainly experienced so far. It may lack technical features such as Trek’s IsoSpeed or Cannondale’s SpeedSave technology but this is an unashamed, Canadian-flavoured off-road powerhouse that I am very positive about so far. In terms of cyclocross as a sport, I think it may even be more fun than road riding as you can take the bike just about anywhere and it will handle it. The only downside is constant cleaning of the bike if I head off-road and I would suspect the bearings on the bike will need to be serviced / replaced more frequently. But in terms of the ride, it’s potentially the best fun you can ever have on two wheels!